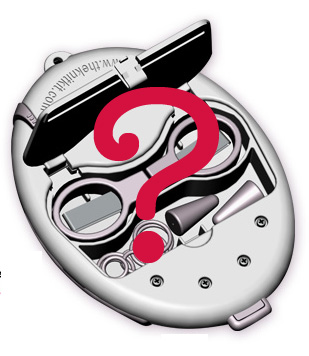 I’m not too big on advertising. In any form. I don’t even like that my pants come with tags on the outside, which amounts to free advertising for whichever clothing company was lucky enough to get my dollar. (It’s actually worse than free advertising. After all, I paid them.) I only own three t-shirts with writing on them: my Yo La Tengo shirt, my Tip Top Bike Shop shirt, and this shirt, which my friend A gave me. My body isn’t a billboard, and neither is my blog.

Except when I plugged The Knit Kit. Which brings us  to why I should have kept to my initial policy.

As I mentioned earlier, Z pre-ordered two of these as soon as she learned about their imminent availability. I’m sorry to say that, in the month since I wrote that effusive post, both of our Knit Kits have failed. On mine, the row counter lock developed a habit of unlocking when the button got pushed, which is the knitters equivalent of someone busting into your car and switching the brake with the accelerator. On Z’s Knit Kit, the tape measure no longer retracts, and the lock on her row counter fared the same fate as mine.  I’ve heard multiple reports of the row counter button breaking off after only a few days of use. Z contacted the Knit Kit folks about a replacement several weeks ago, but despite a promise on their website to respond within 24 hours, she has yet to hear back from them.

The Knit Kit is a great idea, so this is a bit of a disappointment. My advice? Wait for The Knit Kit v. 2.0.