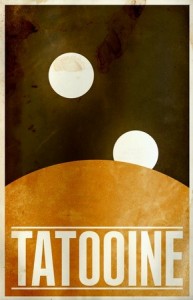 A few months ago I was out for dinner with some friends, and the subject of that old TV show Babylon 5 came up. I hadn’t seen it, so I asked one of my friends for a quick recap. He provided the general premise, but he was vague about some of the specifics. There was a lot of “I don’t remember exactly,” and “there was this thing, but I’m not sure what it was called.”

This kind of science fiction detail avoidance is common among adult nerds. It’s a survival mechanism honed from years of being made fun of for having encyclopedic knowledge of the Dune series, for being able to recite large parts of the Star Wars script from memory, and for  knowing exactly what kind of crystals are decaying inside the Enterprise’s warp core. When I tried to out my friend by pointing out just how vague he was being about those Babylon 5 details, he said, “Well . . . I’m being sort of vague.”

So, although adult science fiction fans might be more secure in their love of the genre than we were as teenagers, most of us are still a little sketchy when it comes to celebrating it in a visible fashion. Well, dear reader, if you count yourself among these people, Justin Van Genderen has given us all a way out.

I didn’t ever expect my inner design freak to be united with my inner Star Wars fan, but this astronomically unlikely event has actually occurred. Mr. Van Genderen’s minimalist Star Wars prints are . . . dare I say it . . . beautiful? Check them out for yourself, and support this guy by buying one (or six). Better do it soon before George Lucas finds out that these exist, and that staring at any one of them for three hours is a much better use of your time than watching any of the prequels.

PS: I know I didn’t mention knitting even once in this post, but geekiness and designiness have been regular topics here, and I love giving a shout-out to cool stuff. So there.