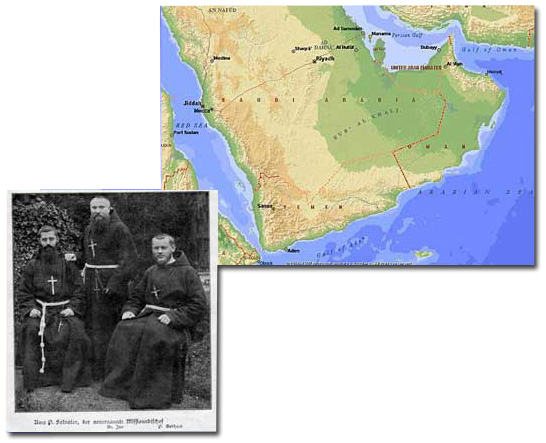 Since there was money to be made from knitting (and we already know the history of how men feel about women making money), it was initially a male-dominated craft. It is generally believed that sailors and traders from Arabia, as well as Catholic missionaries,were responsible for spreading the craft of knitting around the world. Knitting didn’t become the female-associated activity that it is today until cheaper and faster methods for making clothing were developed, and men moved on to other forms of world domination. By the beginning of the 20th century, it was highly unusual for a man to knit. 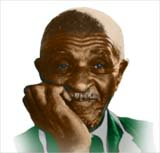 George Washington Carver, known for being an accomplished botanist, revolutionizing peanut farming and for being a former slave, was also a knitter. Taught by his slave owner, Susan, Carver recycled string and burlap for his knitting, and even dyed much of his own thread. 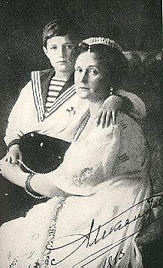 Czarina Alexandra Romanov taught all of her children to knit, including her son Alexei, born December 8th, 1904, and pictured here with his mother. A letter to his father contains a reference to his work on a multi-colored scarf and, according to rumor, was an accomplished sock knitter. He died, along with the rest of his family, on the 17th of July, 1918 Ektarinburg during the Bolshevik Revolution.

“Knitting is a distinct virtue,” said Geoffrey Fisher, archbishop of Canterbury from 1945 to 1961, “It’s reflective and repetitive. Whenever you are engaged in doing a purely repetitive thing, your mind can reflect upon life.”

The distinguished epidemiologist Charles M. Fletcher (born 1911) managed to quit smoking not just once, but twice, by knitting. Too bad there aren’t a whole lot of pictures of him on the internet. 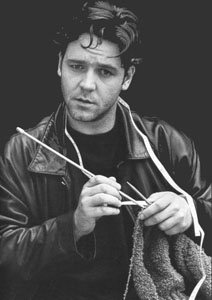 The really funny thing about this picture is that Russell Crowe didn’t actually know how to knit when it was taken. I guess someone thought it made him look sensitive. Anyway, he’s since learned how to knit as a method of anger management, which he probably needed after punching that photographer. 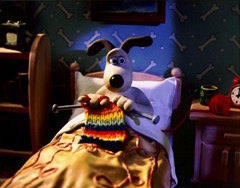 Here’s Gromit, from the opening moments of A Close Shave. Gromit’s a boy, right?