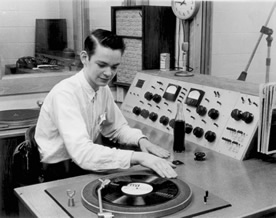 I was interviewed for this five-minute piece about male knitters, which aired on KALX-FM on April 20th, 2006.

I am a regular contributor to the Perspectives Series on KQED-FM in San Francisco. This commentary, “The Subversive Qualities of Male Knitting,” originally aired on July 5th, 2003. It runs for two minutes.

Matt Simon, my cousin and former housemate, was one half of Soundvial, a San Francisco-based audio project that, sadly, disbanded. I make many appearances in their piece “Beyond Scarves,” which is about the bizarre, vociferous, and surprisingly fractious Bay Area knitting community. Its running time is approximately fifteen minutes.

Matt also produced “Knitting for Peace” with guidance from the Kitchen Sisters. This four and a half-minute piece originally aired in an episode of
Invisible Ink on KALW-FM.

Do you like what you’re hearing? Then visit the audio page on my writing site, where there’s a lot more of this stuff.