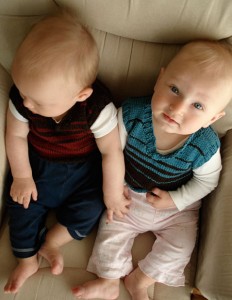 When I was a kid, I imagined that one of the features of the afterlife was a Statistics Room. In this room, you could learn any figure or number from the recently departed life. How many times did you sneeze? How many pairs of shoes did you wear? How much total time did you spend kissing your partner? How many times did you say or write the word “the”? I now know that the notion of the Statistics Room stemmed from a childhood anxiety that even though these numbers existed, no one was keeping track of them. My personal anxieties are a little different these days, but there are still a few numbers that I’m really wondering about. For example: how many total yards of yarn in the world are devoted to hand-knit items for people under five years old?

Before my kids were born, I expected my contribution to this number to be much greater than it actually is. Little Ms. M. and Mr. S., who are now just over two years old, spent the first year of their lives growing at an alarming rate. For all of the baby items I knit for my then-pregnant friends, I had no idea that baby-sized knits are rarely worn for more than, oh, about five minutes. The Fibonacci Sweaters you see in Fig. 1 above were designed and knit for Knit Picks’s Independent Designer Program, which means I sent the sweaters off to Knit Picks not long after that picture was taken. When the sweaters came back—only a few weeks later—M. and S. couldn’t get them over their heads.

It’s much more fun to knit for the twins now that they’re older and not expanding at quite the same rate. The items Z and I knit for them are worn for almost two months now! That said, Z is far outstripping me in the knits-for-kids department. See Fig. 2 below.

The issue here is obvious, and mostly attributable to Z’s uncanny ability to knit and read at the same time, a superpower which I can’t even hope to attain (see Fig. 3 below). The only thing I can do while I’m knitting is . . . um, knit. I can’t even walk and talk at the same time without running into a parking meter. But I’m working on filling in my column in Figure 2, along with balancing out the recipient ratio. As you can see, M has been getting way more stuff than S. Luckily for us, they’re still too young to notice. For now.