I am a mediocre designer. This isn’t a matter of self-deprecation or dishonest humility—there are plenty of things at which I am totally awesome, and I’m happy to list them1. It’s not that my designs aren’t good, but by my own assessment, they are syntheses of other designs. For example, let’s take a close look at Avast:

I get a lot of compliments on this design, mostly because it’s hard to find a sweater design for men that isn’t all-stockinette and also isn’t competing with Comcast for sheer number of cables. But although I did design the cabled band itself, I shamelessly borrowed the overall construction from here: 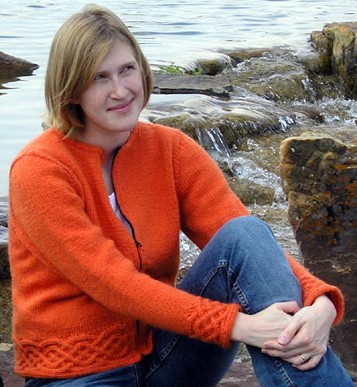 Seamus taught me to knit a cabled band the circumference of the sweater, and then pick up stitches along the edge for the body. It’s a brilliant way to get that horizontal aspect to a cable. So brilliant that I decided to use it myself. The rest of the sweater is standard-issue bottom-up raglan, except for the collar. The idea for knitting twice the length of the collar with a turning ridge in the middle and then flipping the top half over came from here: 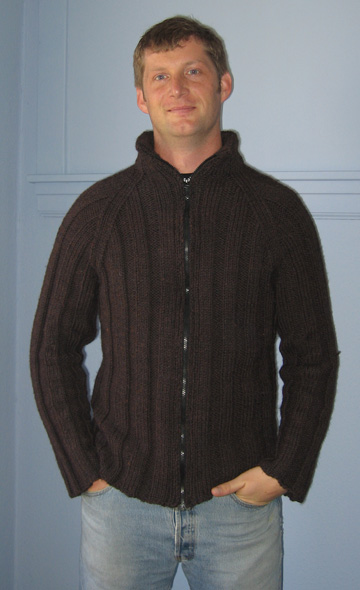 That’s the zippered cardigan from Last-Minute Knitted Gifts by Joelle Hoverson, which I wrote about a ways back. The pattern as written is a bit of a boondoggle, but that flipped collar was a smart trick. It gives the collar enough heft and stability to keep from flopping over, and also means that the bound-off edge is hidden away inside the sweater, giving the collar a more finished look. It takes a certain kind of brain to put all these things together, and there’s no doubt that I have that kind of brain, but the kind of brain I don’t have is the Innovator’s Brain. For the Innovator’s Brain, you have to go here: 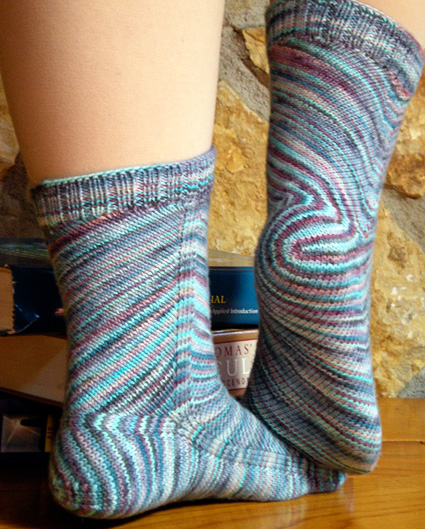 These are Skew from Knitty’s Winter 2009 issue, which I’m currently knitting for Z. It’s no exaggeration to say that the design of this sock is pure genius. The designer’s bio boasts two math degrees, which is probably the minimum requirement to pull off a stunt like this. Each time I complete a section of this pattern, I wonder (out loud, at times) what on earth is going to happen in the next section; something I do with really good books, but never with knitting patterns. Lana didn’t simply create a cool new sock design, she totally upended, destroyed, and reconstructed the way socks get knit.

None of my patterns have done this. Which is fine with me. Innovation is a tall order. I’m happy to be the lucky recipient of someone else’s genius.

1 Eating, sleeping, drinking homebrew, messing up the kitchen, shoving too much stuff into my closet, accidentally hitting my head, losing my keys, making fun of hipsters, and getting my twins to go to bed. That’s about it, really.