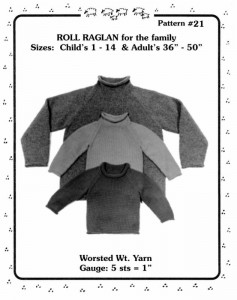 In the fall of 2001, I knit the second sweater of my knitting career: the Roll Raglan from Yankee Knitter Designs. As my first sweater was such a disaster, I chose this pattern with a much more informed sense of what kind of sweater I would actually wear. It’s nearly identical to the J. Crew pullover that was really popular for a while, and which retailed for $35—about $25 less, incidentally, than the price tag for the yarn required to knit one. I’d been knitting for about five months at that point. I was already disinclined to view knitting as simply a means to an end, so that $25 difference meant nothing when held up against the pleasures of the needles.

This pattern has you knit your sweater in four pieces (two sleeves, front and back) which are then seamed together before picking up stitches around the neck edge for the collar.1 Not a bad way to knit an early sweater, as it teaches basic garment construction, plus mattress stitch, which is an invaluable skill. You can also use mattress stitch for the shoulder seams. Much easier than set-in sleeves, which, over ten years later, continue to drive me crazy.

I still have this sweater. The only thing that stops me from wearing it all the time is that I finally admitted to myself that I run too warm for pullovers. That and, well . . . I sort of over-blocked the sleeves. Leave it to a zealous beginner to ruin a beautiful finished product.

Between 2001 and 2006 I must have knit at least four more of these, following the pattern each time. On my second one, I experimented with adding some cables down the front. It was a failed experiment, mostly due to a poor yarn choice (Lamb’s Pride Worsted . . . hairy hairy mohair!) and the sweater ended its life as a felted Christmas stocking. The third one is tucked away in our Earthquake Emergency Kit, where it will hopefully go entirely unused. The fourth one was a gift to a good friend.

My early knitting designs were based on what I’d learned from this sweater. Halfdome, as it appears on Knitty, is worked flat and then mattress-stitched. At the time, it simply didn’t occur to me to design it in the round. Or to knit anything in the round, if it wasn’t written that way. 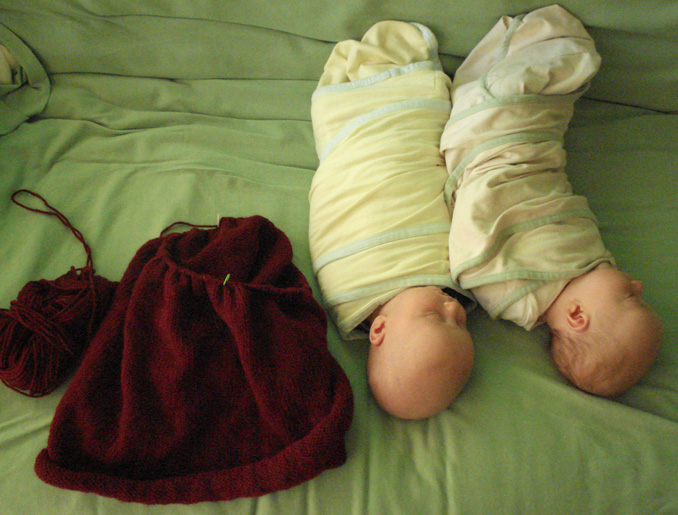 Then Ms. M and Mr. S arrived. Bottle feedings, diaper changes, holding and rocking—all of a sudden, I needed to knit something that I could pick up and put down without worrying about where I was in the pattern. And with my brain incapable of mustering any kind of attention, the project needed to be mindless and simple. All of a sudden, knitting the roll neck sweater in the round made perfect sense. I worked from the bottom up, knitting the sleeves separately and joining it all at the yoke. It was perfect, except for one little problem: I misjudged the length. It came out about an inch and a half too short. When I squat down, it comes up a little too much in the back.

This brought on the final development, something other knitters have known for a long time, but I just finally figured out: it’s much easier to size your sweater when you work from the top town. It’s simple really. As you’re knitting, just keep trying it on until it’s the length you like. Amazingly, this works for the sleeves and the total length of the sweater. And when the knitting is over, the only finishing to be done is weaving in yarn ends. Who’d have thought? 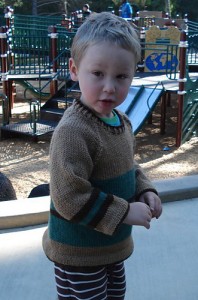 It took Jane Richmond’s Classic Raglan Pullover to teach me this lesson. Applying it to the Yankee Knitter Designs Roll Raglan was a cinch.

In my typical fashion, I have stolen all of these lessons for my own designs. Stay tuned, because if all goes well, I’ve got a new zippered cardigan coming to the Knit Picks catalog.
_____________________
1 This last fact taught me to distinguish hand-knit roll neck sweaters from the J. Crew variety, whose raglan seams go all the way up the collar.