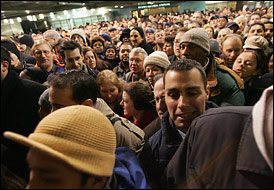 With the increased popularity of knitting among urban residents, the sight of a knitter on a public bus, subway, or commuter train is a now a common occurrence. Knitters are uniquely prepared to deal with the headaches that come with commuting by means of public transportation, as they regularly practice an activity that is both enjoyable and stress-reducing. However, transit debacles like the recent MTA strikes in New York City and last week’s spectacular failures of the Bay Area Rapid Transit System can pose challenges to even the best-prepared knitter. Here are a few simple rules that will help turn your local mass-transit delay into the best knitting experience possible.

Only knit items that you can work on while standing.

Just how did those people get those seats? Never mind, because there’s no way you’re getting one, unless you’re elderly or disabled (and not even then, if you live in New York), so if you want to knit, you better be able to knit standing up. That means no sweaters, no blankets, and no scarves that are past the first two feet. Yes, it’s finally time to learn how to knit socks. Or take the opportunity to knit those . . .um, potholders you’ve always wanted to knit.

Use only circular needles.

In that shoulder-to-shoulder, sweat-soaked subway car that hasn’t moved in over thirty minutes, anything that unnecessarily touches anyone else is considered a capital offense. The rhythm of your straight needles might be relaxing and hypnotic to you, but they’re tapping that guy next to you on his elbow, and he doesn’t think they’re hypnotic or relaxing. He thinks they’re f%#*ing annoying. Double-pointed needles? Even worse. At least your straight needles have caps on the end. Besides, the more needles you’re holding, the more needles you have to lose when the doors of the train finally open and everyone behind you pushes forward all at the same time. 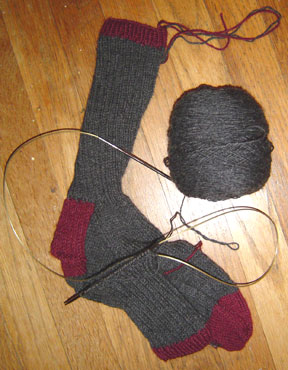 supposed to be completed sometime during the last decade and solve all of your city’s traffic problems. Nor is it the shiny monorail that only goes to “nice” places and is only used by tourists. The Magic Loop is a method for knitting in the round on only one circular needle. The socks in the picture to the right are being knit on the Magic Loop. The completed sock was knit almost entirely during commute hours, and the final three inches, including the toe, were knit during Wednesday’s BART metldown. It’s the best way to knit in a standing-room-only situation, and it’s the only way to knit socks. Learn it, use it, celebrate it. The Loop Rules.

Decide early whether you want to speak to anybody.

There are two kinds of delayed-commuter crowds; the friendly “we’re all in this together” type, and the “I’m going to kill the next person who breathes on me” variety. Your knitting is going to attract attention in both crowds, and you need to be prepared. Even if you’re lucky enough to be in the former kind (ie. you don’t live in New York), you still may not want anyone talking to you. If this is the case, then do not speak to anyone under any circumstances. Put on your sunglasses, put in those iPod earphones (actual iPod not required), because once you’ve started a conversation with that freak next to you who “always wanted to learn how to knit, but never had the patience,” and keeps asking you “whether it’s hard or not,” you are trapped. For. The. Duration. Of. The. Delay.

And if you’re in the other type of crowd? Read the first three rules again. Take them to heart. Break them, and neither you nor your knitting will survive the trip home. Assuming the train actually starts moving again. 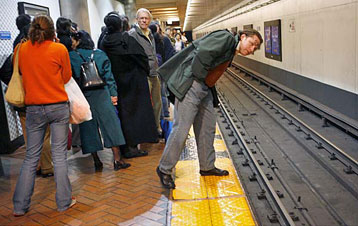