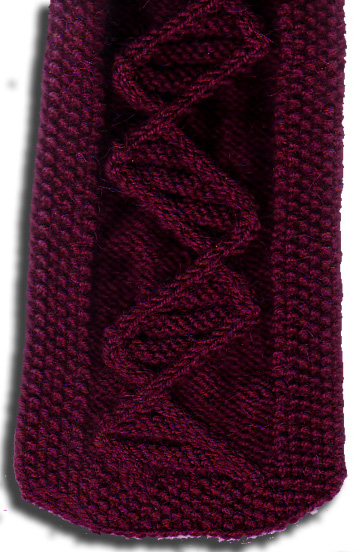 This DNA scarf, which I mentioned in an earlier post, is now in the hands (and around the neck) of my cousin Matt. Matt has always been a big fan of my knitting, so I knew he’d appreciate pretty much anything I made for him. As a post-doctoral fellow in chemistry, I figured he’d get a good laugh out of receiving a scarf with a double-helix, and from a knitting perspective, this pattern was easily the best one out there on the ‘net. Little did I know, it’s also a slam dunk from a scientific perspective.

For one thing, the DNA on this scarf twists around to the right, regardless of the direction of the scarf. As Matt explained to me, this is called the “right-handedness” of DNA; if you were to place your thumb on one of the strands, you would have to twist your hand around rightwards in order to follow the strand upwards. The second big feature of the scarf is the asymmetrical quality of the double helix. See how the pattern shifts from side to side? This is because the two strands of DNA are not evenly spaced apart. The double helix has ” . . . a major groove and a minor groove.” (Thank you again, Matt.) Lastly, the scarf pattern features the correct number of base pairs (ie. ladder rungs) between turns of the helix.

Many visual representations of DNA blow it on one or all of these counts. Like, for example, this Israeli postage stamp: 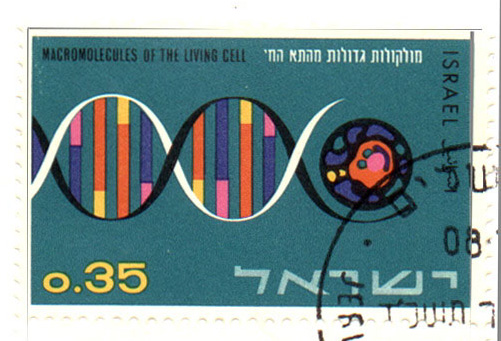 The internet is rife with these kinds of errors, but the most egregious example is in the real world, and something of which I don’t have a photograph——a paperweight from the gift shop at the Cold Spring Harbor Laboratory. Which was, until last October, run by James Watson. As in Watson and Crick, two of the three scientists behind the discovery of DNA.

Why am I boring you with all of this? It shows what happens when we place ourselves in the care of a really good knitting designer. Not only was the pattern for this scarf easy to follow and fun to knit, but June Oshiro actually tricked me into creating an accurate representation of DNA, something I most certainly could not have done on my own. I’m not a scientist, but I hope that the patterns that I’ve put out into the world result in hand-knit items with even half the elegance.

Note to scientists: Did I make any errors in this post? Don’t be shy about letting me know.