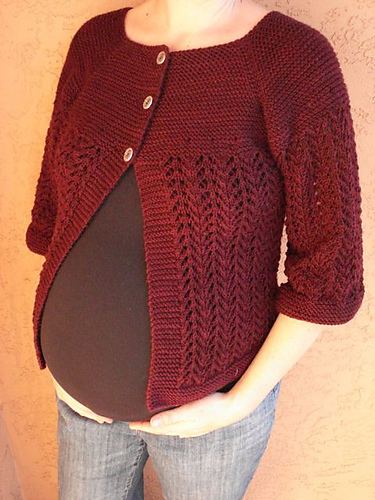 This is the February Lady Sweater, which I just finished for Z.  And that is in fact Z wearing it, and she is in fact pregnant.  Here are the answers to all of your questions, in the order that they’re usually asked:

5. Yes, but we’re not telling anyone what they are.

6. Sure, I’d love a doughnut right about now.  Thanks!

Now, on to the sweater. If you’ve knit this pattern before (and odds are that you have, given how immensely popular it is) then you know that it’s worked as one piece, from the top down. If you’ve spent any time reading my earlier posts, then you know that there’s a special place in my heart for seaming, which translates into a general avoidance of top-down sweater patterns.  So, with the exception of a baby sweater or two, the February Lady Sweater is my first one-piece sweater. Now that it’s under my belt (and over Z’s) I can see certain significant advantages to knitting sweaters top-down, one piece:

So what’s the problem?  Why haven’t I joined the ranks of the converted?

I do knit all of my Halfdomes in the round these days, so it’s not like I’m totally opposed to the seamless knitting.  The February Lady Sweater is an elegantly-written pattern, with truly stunning results, and I know better than to go rewriting patterns that work just fine on their own.  And besides, now that I think of it, didn’t I design a one-piece sweater once?  But I like having controversy in my life, so I’m going to leave this one up in the air.

Speaking of being totally opposed, if you live in California, please vote no on Proposition 4 and Proposition 8.  Keep access to medical care and advice available to teens, and make us all equal in the eyes of the law.