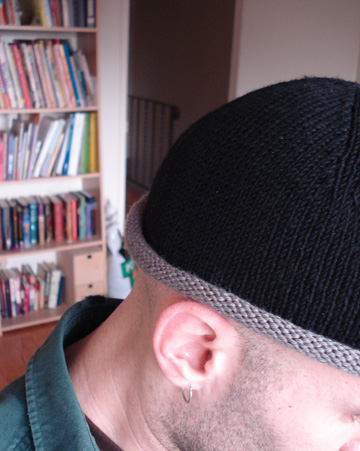 Of the patterns I’ve had published on knitty, the most popular, by far, is Danica. There are 1097 Danicas completed or in progress on Ravelry, and who knows how many out in the real world. (This sort of blows my mind, since Danica is really just a simple entrelac pattern, and I certainly did not invent entrelac.) Coming in second, with 339 Ravelry projects, is Halfdome. That might seem like a distant second, but in the three years since it appeared on knitty, Halfdome has acquired a humbling distinction that Danica has yet to capture.

Halfdome was born out of necessity. I didn’t like many of the hat patterns out there, as most basic watchcaps feature an arrangement of decreases that make the hat look as if a mysterious hand has reached down from above and given it a good twist.  Raglan-style decreases took care of that problem, and any potential scalp-itching was elminated by using a cashmere-merino blend. All of these considerations had to do with my own hairless head, and even though most of my hair loss comes with my Y-chromosome, the remainder comes from my Mach 3 razor. Some people, though, have lost their hair for other reasons, and when I designed Halfdome, I didn’t realize I was designing it for them, too.

At least once I month, I get an email from someone (usually a woman) who has knit Halfdome for a loved one (usually a man) who has undergone chemotherapy and/or radiation treatments. The hair loss that results from these treatments is often accompanied by increased skin sensitivity, and the folks who write tell me that Halfdome is the perfect hat for someone who has undergone therapy for cancer.

These messages make me wish I’d learned to knit when I was eleven years old, which is when my maternal grandmother died. The tumors started in her brain, and eventually made their way into her bones. This was my first experience of cancer-related hair loss—or cancer-related anything, for that matter. My final memories of my grandmother are tinted with the discomfort that any child would have at seeing his grandmother bedridden, bald, and unable to speak, but they also include a vivid recollection of her eyes, which never lost their depth or intelligence. What an amazing thing it would have been to be able to knit a hat for her. Or for my paternal grandmother, who also died of cancer, in 2002. I was already a knitter by then, but I was a newbie, and my needles just weren’t fast enough.

So, here’s a much-belated thank you to everyone who has written to me about knitting Halfdome for someone with cancer. I’m always thrilled to hear from people who have knit my patterns, but the knowledge that one of my designs is bringing so much comfort during such a difficult time is a gift I never expected to receive.