There’s no doubt that the biggest reason for the three months of silence is little Ms. M and little Mr. S, who are now a year old (!!!) and will soon fit into the Angle sweaters that Z and I knit for them . . . oh, a year and a half ago. I thought I was busy and tired before I had kids. Clearly, I had no idea what I was talking about.

The second biggest reason things have been so quiet here is because most of the knitting I’ve been doing has been for publication. Most publications don’t like you to post pictures, patterns, hints, implications, or insinuations of what you’re working on. There are good reasons for this, but most of my ideas for this blog come from things that I’m knitting, so it limits what I’m able to publish here. 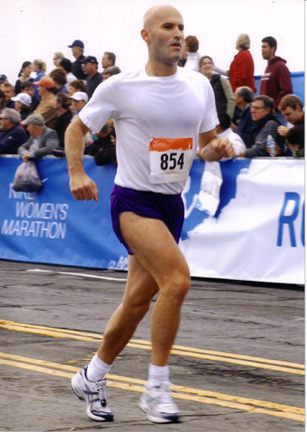 This is a picture of me completing the 2005 Nike Women’s Marathon in San Francisco wearing my favorite running shorts. You might not be able to tell this on your computer screen, but those shorts are purple. Unlike any of my other running shorts, these are possessed of a magical power: they turn anyone who sees them into a twelve-year old.

My collection of running shorts includes three other colors; black, blue, and maroon. None of those other shorts have the same power as the purple ones. My purple shorts have inspired people to hoot, holler, forget what they were talking about before I showed up, or simply descend into babbling nonsense. On one occasion, they turned an entire schoolyard of girls into shrieking fools. I don’t think I could have gotten the same response if I’d run by wearing nothing at all. They’ve also caused people to call me a few names:

This raises an obvious question—aside from why so many homophobes are stupid enough to live in San Francisco—which is, what is up with the color purple? True, those shorts are cut rather high, but I show about as much leg in my other shorts, and I don’t get anywhere near the same reaction. I get similar responses when I knit in public, but nowhere near the same number, and never with as much virulence. What is it about a man in purple that inspires such idiocy?

This is not a rhetorical question. I would really like to know what you think. There is a lot at stake here. I love those purple shorts, but I love not being shouted at even more, so it’s likely those shorts are headed for retirement.